In 2006, Bela Breslau and Stephen Billias founded the Shintaido Farm, a center for the practice of Shintaido. Many, many Shintaido events were held there during its ten-year existence. In 2016, Bela and Stephen sold the Shintaido Farm. What has become of it since then? The Shintaido Farm is now known as the Windhorse Hill Retreat Center, housing the Engaged Mindfulness Institute. It is a thriving enterprise under the leadership of Fleet Maull, a student and Dharma Successor of the late Roshi Bernie Glassman of the Soto Zen Buddhist sect, and Kate Crisp, who lives at the farm and is the Executive Director of the Prison Mindfulness Institute.

The guest instructor list of the Engaged Mindfulness Institute reads like a who’s who of American Buddhism: Joan Halifax, Pema Chodron, Joseph Goldstein, Rick Hanson, Jack Kornfield, and Sharon Salzberg have all taught there.

Fleet and his business partner Kate Crisp have expanded the house in several interesting ways. They converted the two-car garage into an office. They extended the dojo entryway deck and added a bathroom off it. They finished the basement. They added sconces on the dojo walls, a very attractive lighting change. 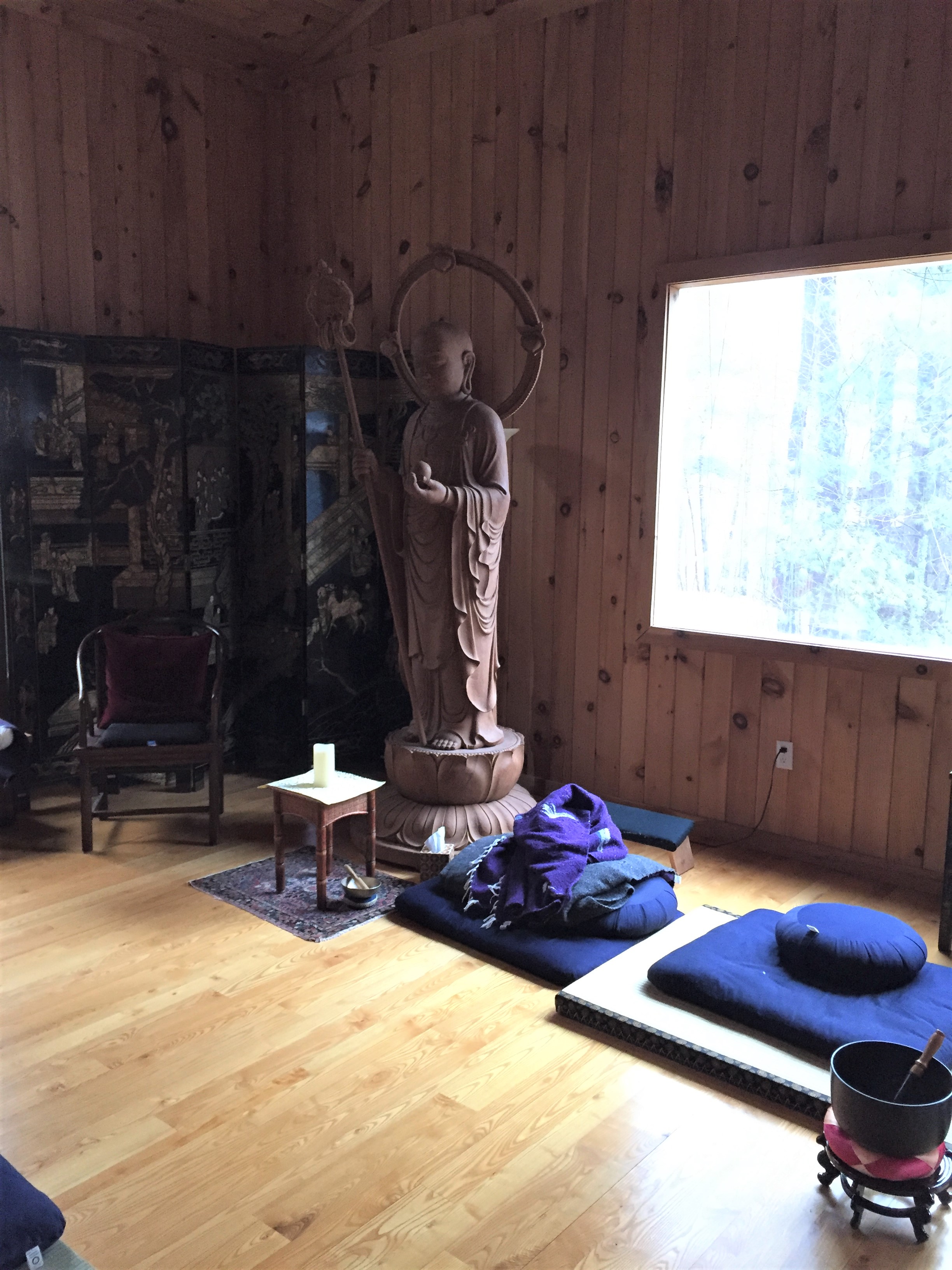 The dojo, which Stephen kept empty as a sacred space for the time it was the Shintaido Farm, is now a multi-use space. The front east-facing part with the two big windows is a meditation room. A large statue of Jizo, the bodhisattva who is the protector of travelers and the unborn, stands in the northeast corner of the room, a gift from Roshi Glassman. A set of shoji screens divides the room. The back third of the dojo is now a meeting area with tables and chairs. The piano has been brought into the dojo from the living room.

We like to believe that the spirit of Shintaido still resonates in the space. A young organizer named James Frank told us that he occasionally sleeps in the dojo for the good feeling he gets from doing that. He said that many people have commented on what an ideal meditation space it is. The room still has glowing ash floors and bright yellow pine walls, now covered with many lovely Buddhist scrolls and paintings. 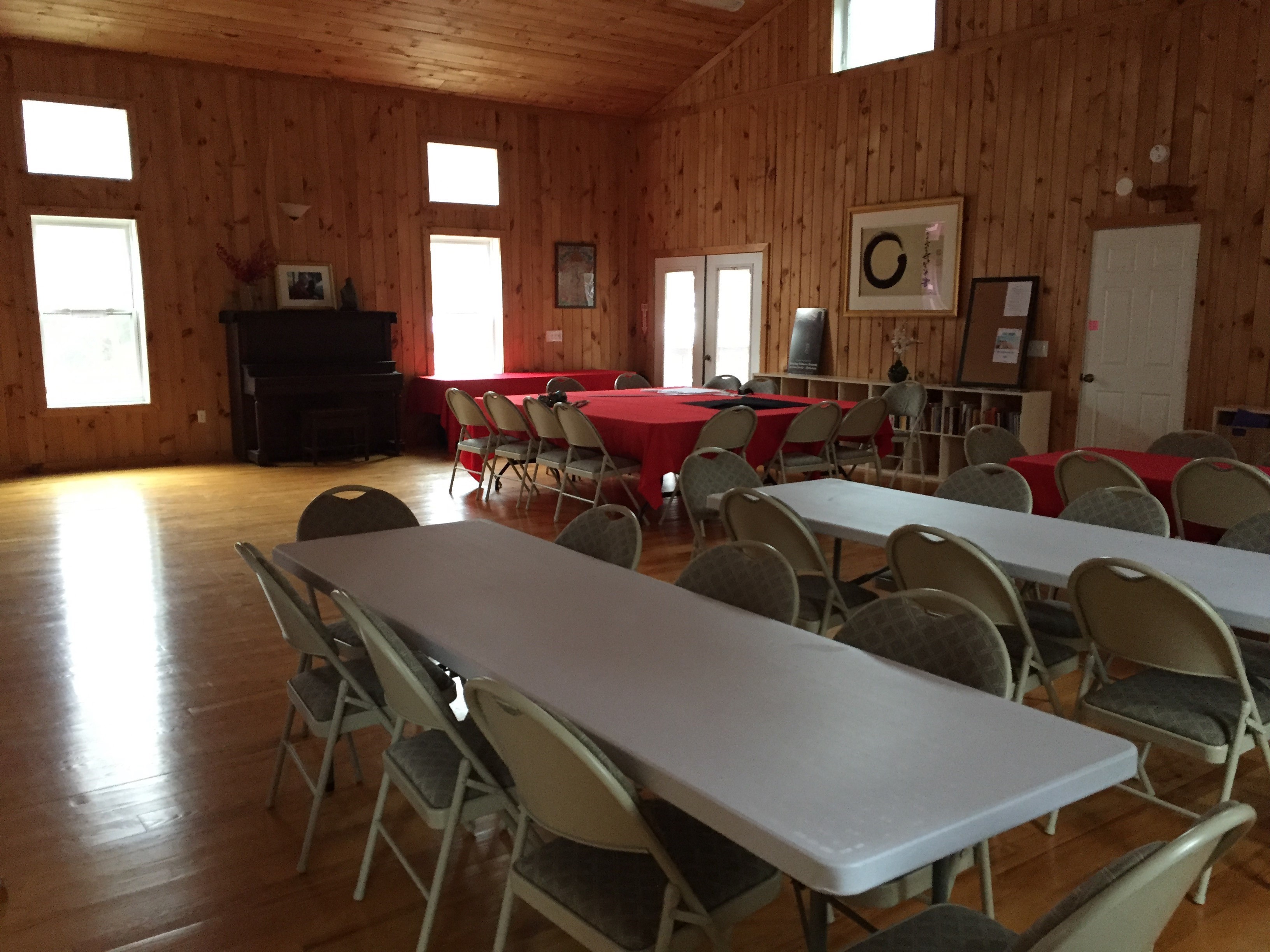 If you visit the website, you’ll see many pictures of the place as it is used now, with students in meditation and meetings. Bela and Stephen are excited and gratified that the Shintaido Farm has become a lively and active place of spiritual development. All who participated in the Shintaido Farm experience contributed to the feeling that we created, and we can all be thankful and that good and important things continue to happen there. 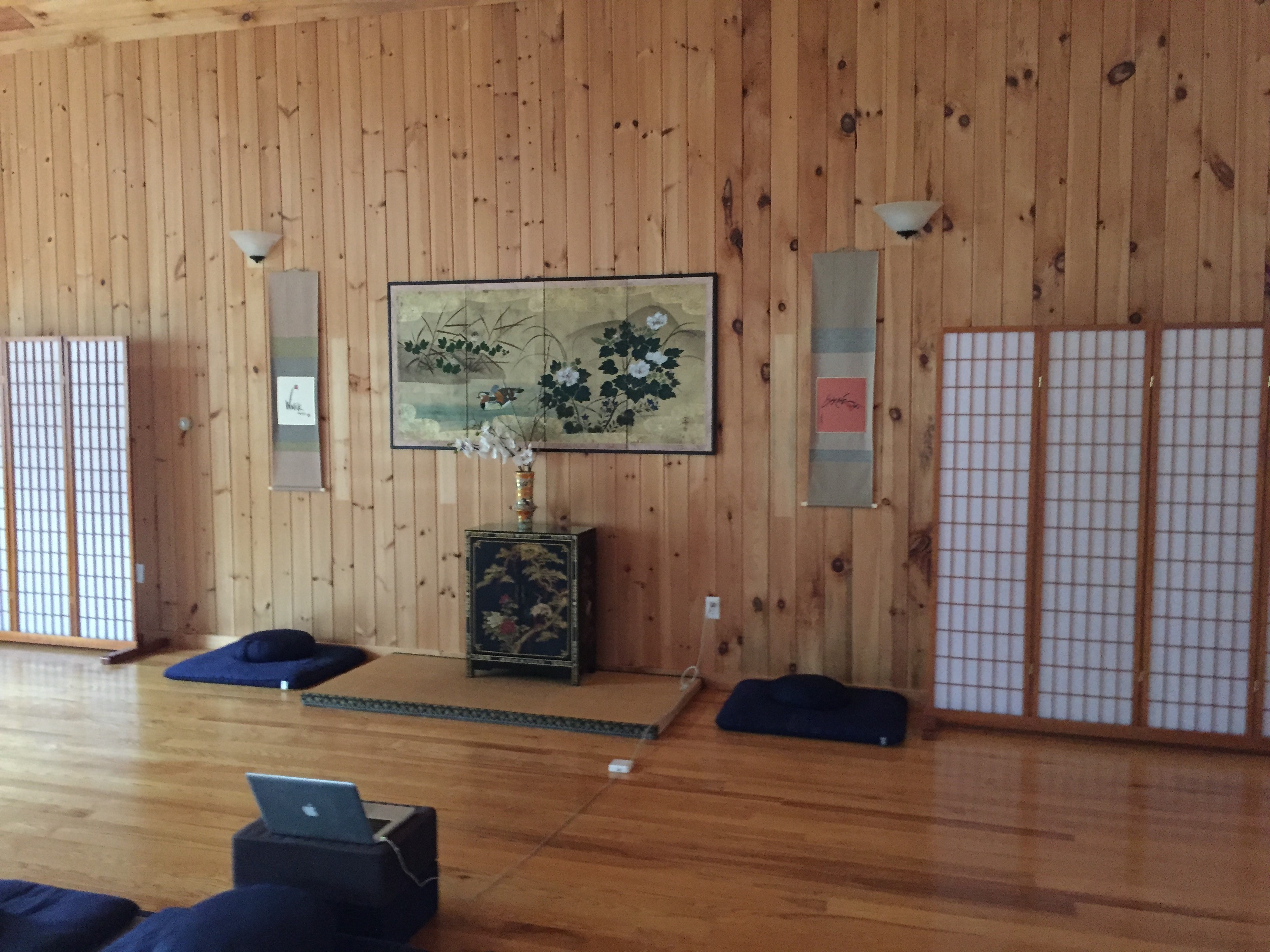 On October 19th, 2019, from 2:00-4:00 p.m., Bela and Stephen are returning to the place on River Road for a book launch/book signing/book party to celebrate the publication of Stephen’s collection of short stories entitled A Book of Fields: Tales from the Pioneer Valley. A local band called The Green Sisters, made up of four real sisters who play and sing Appalachian folk and other musical styles with wonderful sisterly four-part harmonies, is going to provide music, taking advantage of the amazing acoustics in the dojo. See The Green Sisters Gigs web page. This is an opportunity for those who cherished the Shintaido Farm to pay a remembrance visit. 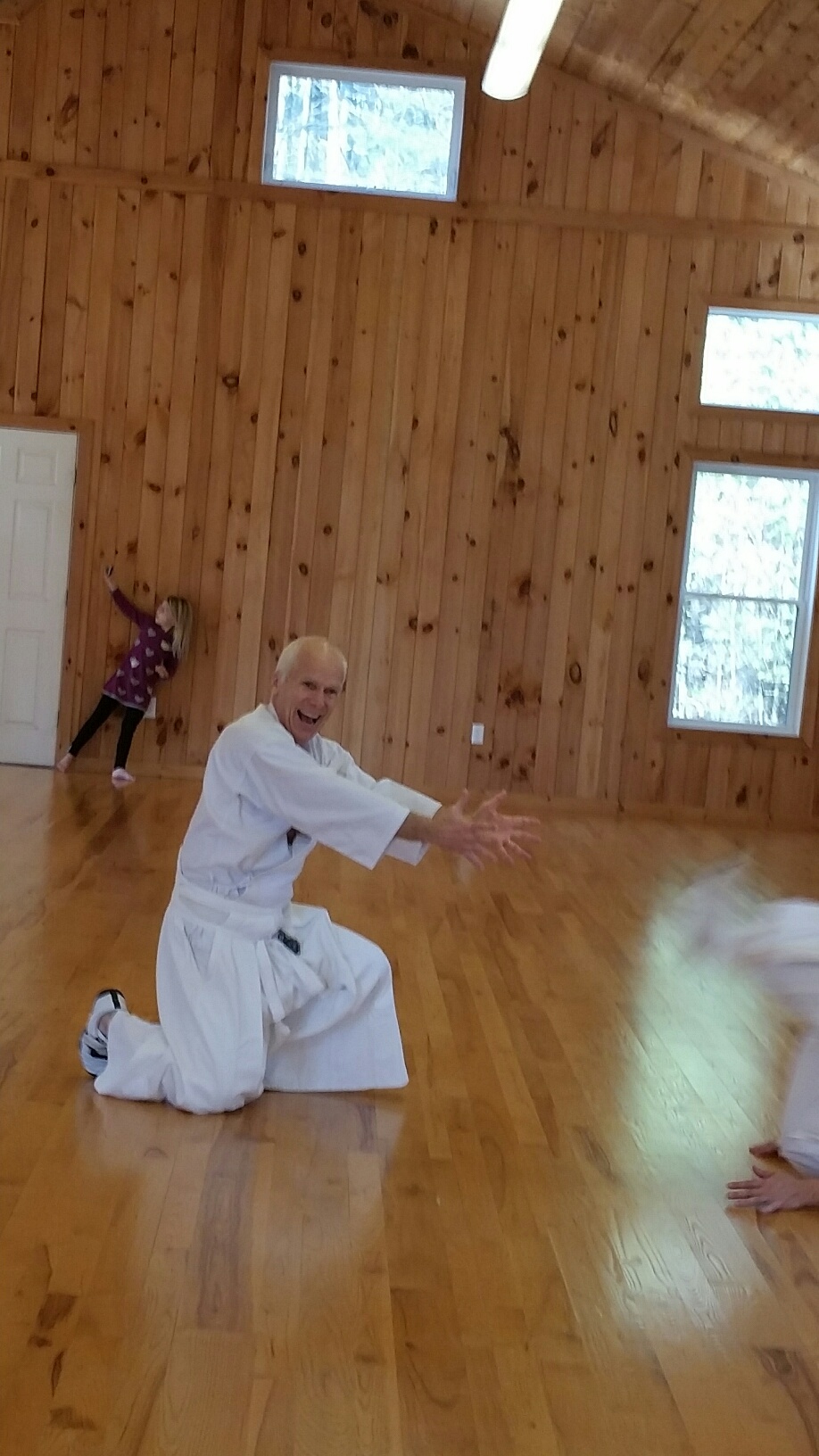 Best of all, the Shintaido spirit that flourished in New England before the founding of the Shintaido Farm continues to burn brightly in the hearts of Shintaido Northeast (SNE) practitioners even after the Farm is gone. SNE is still dealing with the loss of its leader Joe Zawielski.

We have hundreds of pictures of Joe giving gorei in the dojo and on the fields of the Shintaido Farm. His teaching and his spirit imbued the Farm with some of its special magic. Gambatte all! 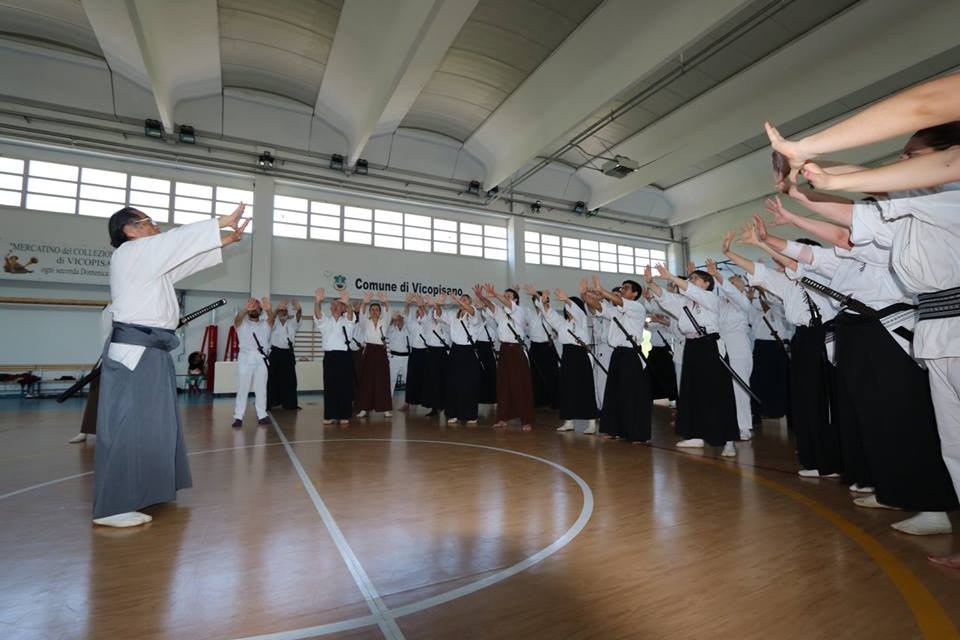 By Shin Aoki and Derk Richardson

Over the Martin Luther King, Jr. weekend, January 19–21, Pacific Shintaido hosted its Kangeiko 2019 at Marin Academy in San Rafael, California. Master Instructor Masashi Minagawa traveled from his home in Bristol, England, and, as guest instructor, developed and taught a curriculum loosely based on the theme “The Sword that Gives Life.” PacShin board members and gasshuku organizers Shin Aoki (Director of Instruction), Derk Richarson (Gasshuku Manager), and Cheryl Williams (Treasurer) presented the theme to Minagawa sensei, inspired in part by the recent passing of beloved Shintaido teachers John Seaman, Joe Zawielski, and Anne-Marie Grandtner, and the naturally arising question of how a community can heal and revitalize itself in the wake of such losses. In Japanese tradition, the sword has been used for the purpose of purification and cleansing, Minagawa sensei explained. When people pass on, the sword is used in ceremony to purify evil spirits and ensure the loved one’s safe journey. 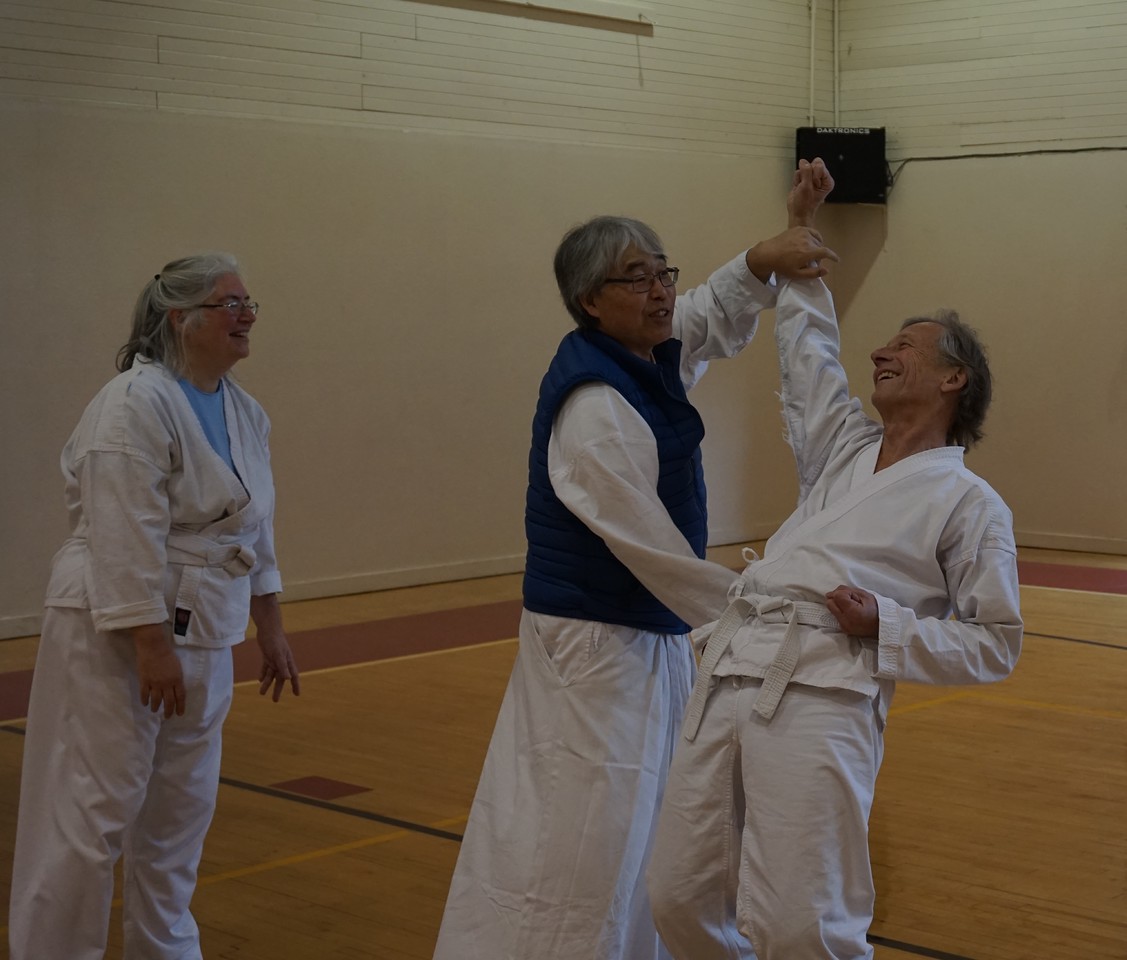 Holding this idea in heart and mind during four keiko—the first taught by Shin sensei, the next three by Minagawa sensei—anywhere from 15 to 18 practitioners cultivated their relationships with bokuto and bokken through a variety of movements, kata, and kumite. 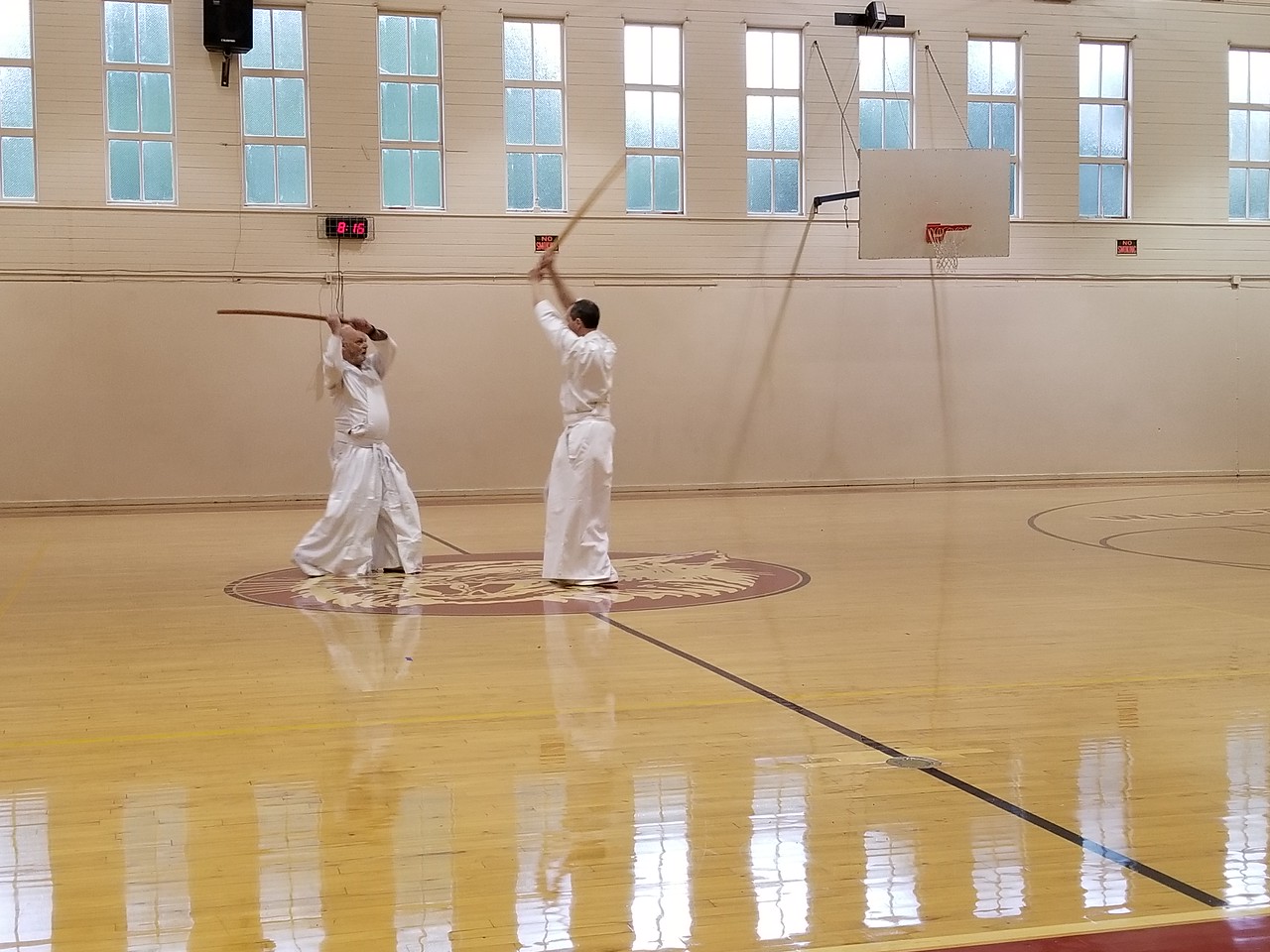 Irimukae. Individually, each of us held our sword like a candle in front of our body, and walked forward and backward. Your body enters the sword, and the sword enters you. The sword and you become one—and move as one. This exercise helps shift our fear of “getting cut by a sword” into “welcoming a sword.” In kumite, two people held one sword and moved the sword like a kayak paddle, in a figure-eight pattern of jodan and gedan cuts, to unify three worlds—the self, the other, and the sword. Elements of martial art, abstract art, meditation, and body care come together in the movement.

Diamond Eight Cut. In preparation, we held our swords with both hands far apart and, following the Diamond Eight pattern, reached up and down, side to side, back and forth, and diagonally to synchronize the sword movement, the body twist, and the traveling gaze. At the beginning of the more formal kata, we visualized the heavenly sword descending and entering our bodies, coming together with our inner swords. Thereafter, every swing of every cut could be done in concert by the physical sword, the inner sword, and the heavenly sword. In unison, we moved back and forth through the dojo, each of us continuously following the Diamond Eight Cut sequence. Eventually, we all started interacting with one another. Some continued cutting precisely, some were swimming through the crowd like fish, and some were dancing joyfully. 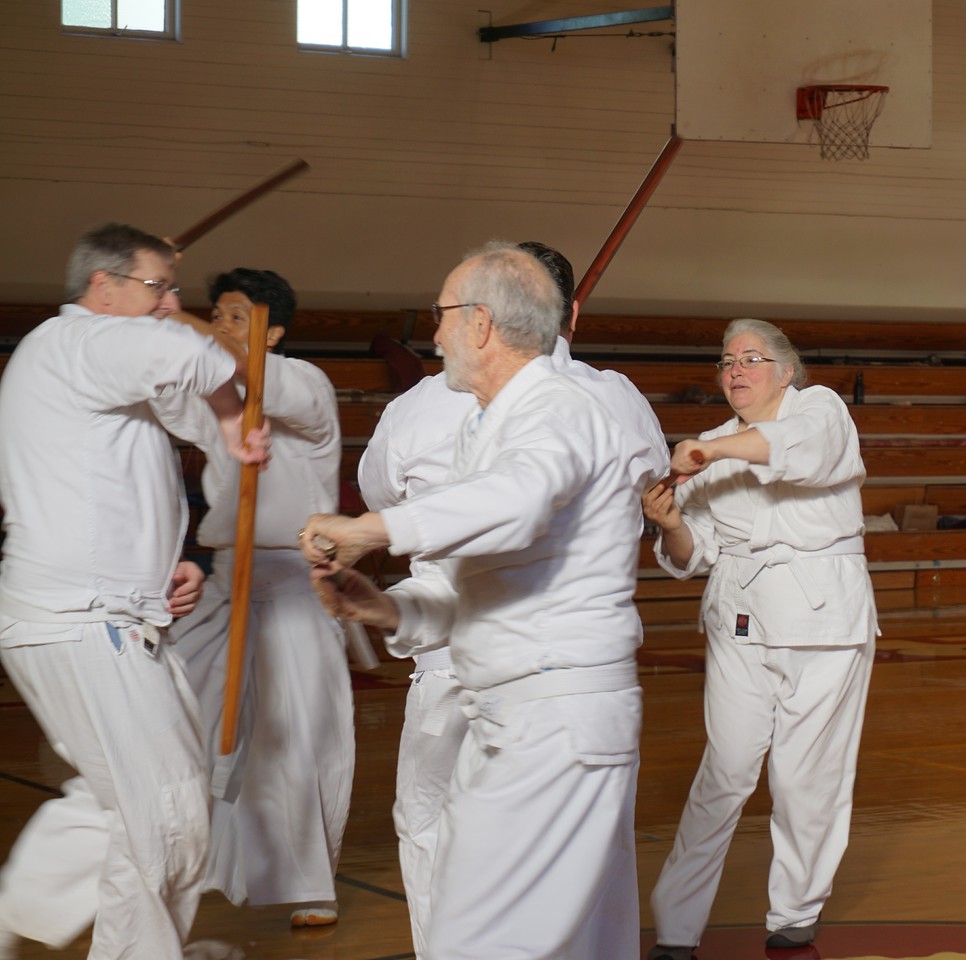 An outside observer might have seen the swirl of bodies and swords as the spontaneous manifestation of li, a Neo-Confucian concept that Alan Watts described as “the asymmetrical, nonrepetitive, and unregimented order which we find in the patterns of moving water, the forms of trees and clouds, of frost crystals on the window, or the scattering of pebbles on beach sand.”

Shoden no Kata. This was the first Kenjutsu kata for many gasshuku participants. Slow and graceful, it emphasizes the continuous flow of the sword movement from the beginning to the end of the kata, it demands seamless concentration, and it develops your awareness of every moment of your sword swing.

Without sword, we practiced Tenchi-kiriharai, a karate technique used against a tsuki attack, which helps the attacking partner connect with heaven and earth, and invites investigation and embodiment of a liberating upward-and-downward spiral motion. 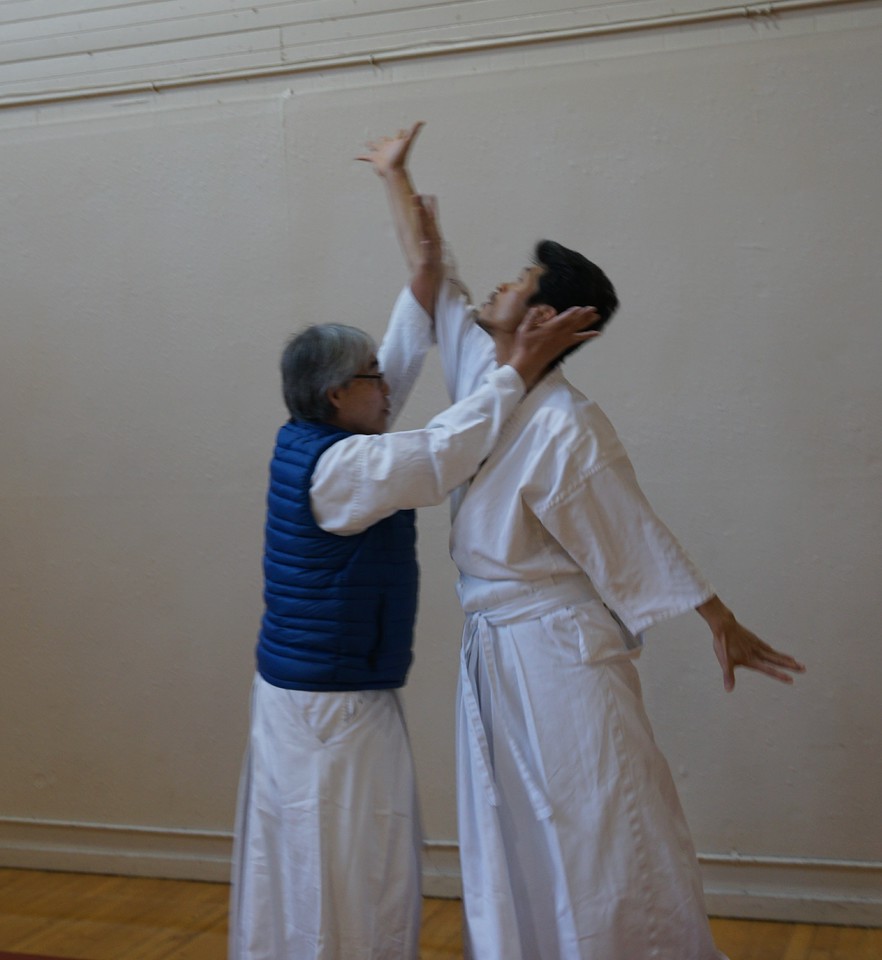 On Sunday morning, Kenjutsu exams were offered, with Robert Gaston serving as exam coordinator and Connie Borden as goreisha. Cliff Roberts took a “mock” exam for evaluation and received feedback, and Chris Ikeda-Nash performed, passed, and received his certificate for Shintaido Kenjutsu Ni-Dan. Rounding out the morning, Margaret Guay taught an abbreviated keiko that explored deep listening and brought participants into intense and subtle levels of ma.

At one point during Kangeiko, Minagawa sensei talked about our Shintaido practice—and our everyday lives—in terms of walking a path, on which are also treading all those who have come before us and all those who will come after. The majority of participants at Kangeiko, and at the Advanced Workshop taught by Minagawa sensei the prior weekend, were Bay Area residents. But with Shintaido practitioners flying in from the East Coast (Margarat Guay, Rob Kedoin, Brad Larsen, Lee Ordeman, and Elizabeth Jernigan), and with Minagawa sensei coming from England and H.F. Ito sensei coming from France, the gasshuku felt at once local, national, and international. Minagawa sensei encouraged us to invite John, Joe, and Anne-Marie into our practice, which gave the event a spiritually universal feeling, as well.

Between-keiko pot luck brunches at the homes of Sandra Bengtsson and Robert Gaston (during the Advanced Workshop) and Jim and Toni Galli Sterling (during Kangeiko), plus a group Mexican dinner and post-gasshuku restaurant brunch in San Rafael, all served to strengthen and refine the ma between participants, and added to the sense that the sword had indeed given new life to our Shintaido community.